Fallout 76 is the latest post-apocalyptic game from Bethesda Game Studios. The game is planned to be released in November 2018 and will be available on Xbox One, PlayStation 4 and the PC. This will be the first online multiplayer game by Bethesda Game Studios and will not feature any human non-player characters, all human characters will be other players.

“It is set in an alternate version of history and takes place in 2102, twenty-five years after a nuclear war that devastated the Earth. The player character is a resident of Vault 76, a fallout shelter that was built in West Virginia to house America’s best and brightest minds. The player character exits the Vault on “Reclamation Day” as part of a plan to re-colonize the Wasteland.” – Wikipedia

Fallout 76 will feature popular landmarks and monsters from throughout West Virginia. This will be a great opportunity for dark tourism in the state and to inform people of our horrific folklores and legends.

Here are some of West Virginia’s popular monsters that appear in Fallout 76.

Perhaps the most famous of West Virginia’s monsters, Mothman is tied to events that started happening in 1966, which led to the 1967 collapse of the Silver Bridge across the Ohio River that claimed the lives of 46 drivers. [read more]

On September 12, 1952, four boys were playing football on the playground at Flatwoods School. The saw what was described as a “shooting star” that fell to earth on the top of the hill adjacent to the playground. They later described that a huge creature with a bright red face and green clothing was hover near the crash site. [read more]

One of the many monsters in West Virginia folklore, the Grafton monster is another popular monster that started in Grafton, West Virginia; when it was allegedly spotted in 1964 on Riverside Drive. The monster was described as being nine feet tall and about four feet wide. [read more]

We have received numerous story submissions in the past on “The White Thing”, however, each story has a different description of this insane West Virginia monster. One submission described the monster larger than a dog but with four eyes, while another describes it as a large white bear. It has been witnessed to leap 10 feet in the air onto a hillside in Ragland, WV. Others in New Cumberland, WV have heard it let out a terrible scream.

The Snarly Yow is described as a large black dog with a grotesque mouth, large fangs, and a howl like a werewolf. The Snarly Yow traces back to tales told by German settlers during the 1700s in the Potomac Valley in the mountains around Harpers Ferry. Although it has been described as a physical monster, it resembles more that of a hellhound, a demonic dog. Reports stated that when an experienced hunter came across the Snarly Yow, he shot at the monster, however, the bullets passed right through it. Although we have no stories on the Snarly Yow, we do have several Werewolf-like stories, such as the “Demon Creature“.

The beast is a carnivore with an unending hunger for flesh. Feeds on man, animals, any living creature. Could be solitary or in a small pack. Often said to growl, grunt, moan, and have a blood-curdling scream like a banshee. Live in dark, damp, isolated areas like caves, abandoned mines, or forest reclaimed structures. [read more] 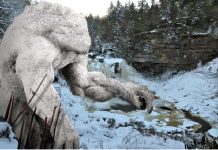 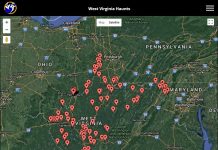