On September 12, 1952, just before dark four boys were playing football on the playground at Flatwoods School. These were local boys and they often played at the school in the evenings. Today would be special because what was seen this evening would cause people to talk for many years to come.

What the boys saw was described as a “shooting star” that fell to earth on the top of the hill adjacent to the playground. The place where it landed was known as the Bailey Fisher property. As children are prone to do, they decided to check it out. On the way up the hill, they stopped at the Kathleen May home and Mrs. May, plus her two sons accompanied the group up the hill.

When they got to the top, Mrs. May noticed that “…the night was foggy and there was a mist in the evening air”. She also said that “…the air had a metallic smell which burned their eyes and noses”

About the length of a football field away, they all saw an object that was glowing and hissing. Walking closer to check out the “star”, they noted that it was about 10 feet around.

A few feet away from this glowing object they saw two lights, much like the glow of flashlights, about 12 inches apart. One of the boys had a flashlight and when he turned it on the object a huge creature with “…a bright red face, bright green clothing, a head which resembled the ace of spades, and clothing which, from the waist down, hung in great folds” was seen. 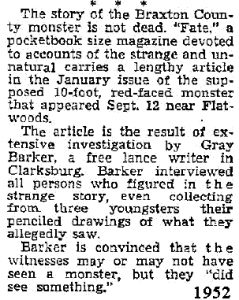 As the creature seemed to be floating on air towards them, the group all ran from the hill back to the May home to call the sheriff.

The sheriff, Robert Carr, and deputy Burnell Long were investigating a report of a burning object thought to be a downed airplane, below Gassaway on the Elk River. By the time they got to the Flatwoods scene, much evidence was destroyed by people who had heard the story and had gone to see the “monster” for themselves.

Newspapers sent special reporters to cover the story. Many investigators also came and took soil samples. One well-known scientist, Ivan Sanderson, and his assistant, Eddie Schoenenberger, came from New York City. Mr. Sanderson was known for his studies of odd and unusual happenings. With Mr. Schoenenberger, he made a detailed study of the land and soil. Pictures were taken, some of them from airplanes. Mrs. May and the boys were all questioned many times about what they had seen, and the stories were always the same.

The original broadcast of the Braxton County Monster from 1953.

With all the attention given to this sighting, one would think that a report would have been definite. However, it was never revealed what was found from the scientific tests and the investigation.

March 16, 2017
In 1979 in the small town of Rainelle, W.Va, I along with my brother and twenty other people stood near the railroad tracks around...

March 15, 2011
I've worked as a security guard for six years,and worked on many job sites around surface mines in McDowell County and Wyoming County. One...