I grew up in Coopers Creek in Kanawha County, WV. I lived up a holler on top of a hill.

I was in my late teens when this occurred. I am now 47.

One night about 2 am, I heard a very loud screeching sound. It woke me up out of my sleep. This was during the summer. My parents had a window air conditioner going and they claim they did not hear this screeching sound.

I would hear this animal quite frequently. I always got extremely scared and could barely sleep the rest of the night. I refused to sleep with the window open. We did not have central air so I would generally sweat myself to sleep because I was so scared. Eventually, my parents heard it during early morning daylight. They did not know what it was either. It was something that none of us had ever heard before.

I remember its sounds would echo over our hill. I was outside one late evening, in the summer time, I heard it on one side of the mountain and then within minutes, you would hear its screeching on the opposite side of the mountain. It is possible that there were two of these unknown critters making the noise. Maybe they were communicating with each other.

I remember asking our neighbors if they heard the screeching and no one else claimed to hear it. My mom and dad both witnessed it.

We would hear that screeching every summer until I moved out at 19. My parents claim they never heard it again. They no longer live in the area so sometimes I wonder if the new house owners ever hear it.

January 19, 2018
While driving home one night in Glen Jean, WV, I noticed two shiny eyes in my headlights on the side of the road. As... 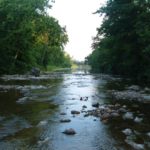 October 1, 2016
One night three of my friends and I went seeking adventure in some creek beds in South Charleston. The friends I went with had...
© 1999-2023 West Virginia Ghosts. All rights reserved.