We bought a house which was also a log cabin that was built in 1766. It was located on WV 9, 3 miles west of Hedgesville, beside Tillman creek. The first night we spent there, I was sleeping on the floor when I felt something pushing up against me. It was a large dog laying beside me and he/she had stretched out thus touching me and waking me up. We did not own a dog at that time. I was so tired and exhausted from moving that I said the heck with it, I’m going back to sleep.

That same night I was woken again by a tall black figure standing in the doorway. I figured it was my husband (he had fallen asleep on the couch). I asked him several times what he wanted, but didn’t get an answer. There again, I said the heck with it and went back to sleep. The next morning he said it wasn’t him and that he had not gotten up at all that night.

Through the month we would hear loud footsteps pounding up the stairs, but no one was there. Doors would slam shut.

Another time a young man stood beside me. He was watching me clean the cobwebs. I saw him clear as can be, but he was a ghost. The space around us was bone cold and it scared me. So I went outside to warm up and get away from him. It was 90 degrees out that day. Other things like that have happened to me, but I won’t get into that. The house/cabin burned down. No more ghosts. We’ve rebuilt. 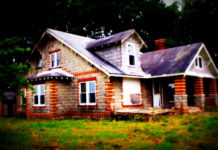 The White Wolf of Whitlock Farm

November 29, 2019
I refuse to mention the grocery stores by name but 7 years ago I was a manager at one in Southern West Virginia. It...

The White Wolf of Whitlock Farm

July 12, 2019
I guess a lot of people know about Wolf Creek near Fayetteville because it drops into the New River Gorge in a series of...

July 11, 2019
The festivities of Halloween bring about tales of ghosts, goblins, witches, and of course the Devil himself. Year after year, we engage in the...
5 753 spam blocked by CleanTalk
© 1999-2021 West Virginia Ghosts. All rights reserved.